Which is the best Isle of Wight beach for...?

On your Isle of Wight holiday, you don't want a romantic and inaccessible beach if you are taking a dozen children to the seaside. Equally, you don't want to be hit in the face with a frisbee and then chased by a stray dog whilst proposing to your fiancee. So which is the best beach for toddlers, teenagers, children, sunsets, swimming, rockpooling, surfing, kayaking and other situations?

We've assembled an esteemed panel of judges, including me and er...well, I did ask my wife about a couple of them and I might have mentioned it to my mum. Roll out the red carpet and prepare your applause for the The Isle of Wight Guru Beach Awards.

I've been agonising about this one, but Sandown has a lot to offer toddlers and is a worthy winner. There's an excellent playground in Sandham Gardens towards the Yaverland end of the beach. Sandown Pier has some indoor entertainment suitable for younger visitors.

​There are toilets and parking nearby for those endless trips to and from the beach to find missing shoes and teddies. The water is also clean* as it has won Blue Flags for cleanliness and the sand is golden(ish) and attractive. Plus, dogs aren't allowed on Sandown beach in the summer which means you won't have to tolerate some huge great animal sniffing your child and then marking its territory in their sandcastle.

Appley at Ryde is another good choice - there are two modern playgrounds on the Esplanade, toilets and parking as well as a paddling pool and a huge great sandy beach. It also has some nice shady spots under big trees which are welcome if you've left the suncream in the holiday cottage.

See our guide to days out for toddlers for more ideas.
*For the latest swimming water quality updates, we use the free Safer Seas Service map which is run by a charity called Surfers Against Sewage. Personally, I think they should have called it Turd Alert, but it's a useful site nonetheless.

On one random day that I checked it said that 'storm sewage has been discharged from a sewer overflow in this location (Sandown) within the past 48 hours' whereas nearby Ventnor had excellent water quality. On other days, Sandown was fine for swimming.

Best Isle of Wight beach for children and families

Best Isle of Wight beach for pretending you went abroad

This one is a tough one to call, and you've got to get it right if you are proposing. I spent many nights lying in bed wide awake trying to decide between Compton Bay, Thorness Bay and Gurnard.

Gurnard is ideal for finding a bench, opening a punnet of strawberries and admiring the yachts passing on the Solent. However, it isn't quite as remote as the other two because it is backed by massive houses owned by bare-chested men who like to sit on their balconies. I fear this might prove a bit distracting.

Thorness Bay in itself isn't a stunning beach - it's fairly scrubby, but at night it has really lovely sunsets (read about our visit to Thorness Bay).

The downside with Thorness Bay is that you have to navigate your way through a large caravan park with a one-way system to get to the shore, which might be a mood killer.

So, my vote goes to Compton Bay. You can even copy my idea of spelling out a romantic message in the sand and wandering along the cliff top.

Best Isle of Wight beach for reliving your school days

For a relatively safe and serene kayaking experience, I would consider St. Helen's where a company called Tackt-Isle is based. The water is ankle deep and rarely manages anything more than a tiny wave. There's a massive great fort in the sea which was built by Lord Palmerston who feared the French were coming. Around Shanklin and Sandown you will find places to hire kayaks for a bit of holiday larking. The water's a bit deeper than St. Helen's, but it is pretty serene usually.

Other people head to Newtown Creek, but I'm never quite sure on how you are supposed to get to the water safely. We took an inflatable boat out once and ended up wading through a muddy bog to reach the water. Probably not ideal for a family day out...

Best Isle of Wight beach for bodyboarding and surfing

Best Isle of Wight Beach for Stand Up Paddleboarding

As runner up, we've included four places where you can hire paddleboards (as of 2021). After all, you may not want to splash out £200-£500 on a paddleboard before you er, splash out on the water.

St Helens is a bay which usually has calm water and is home to Tackt-Isle Adventures. They'll hire you a stand up paddleboard or you can pay extra for introductory lessons. Wight Water Adventure Watersports is a similar sort of place which is half way between Sandown and Shanklin. Bayside Beach Hire is based in Sandown whilst there are simple cash-and-bumbags hire places on Shanklin seafront.
Looking for a stand up paddleboard? Search deals on Amazon

Runner up: Steephill Cove or Freshwater Bay (head round to the right as you face the sea at low tide)

Fort Victoria in Yarmouth has some purpose built barbecues you can use for free. They are metal stands which stick out the ground with the idea being that you bring your own disposable barbecues.
​
You can book the barbecues for big groups, or you can just turn up and tap your watch in a passive aggressive way until other users move along.

Fort Victoria is a former military battery which is by a shingle beach looking towards Hurst Castle on the mainland. It's not a sandy paradise but it's got some green space to run around and - remarkably - free parking.
Runner up: Red Cliff, Yaverland

If you prefer the rustic experience of getting sand kicked into your barbecue then the far end of Yaverland beach near Sandown is a good choice. It's the only Isle of Wight Council run beach which officially allows barbecues. Don't sit right under the cliffs as they do have a habit of collapsing, which might put out your barbecue.

I thought twice about recommending a barbecue spot on the Isle of Wight, as there are some uncivilised folk out there who leave used disposable BBQs on the beach and happily trot home. The clue is in the word 'disposable', buster.

Equally, there are some people who start up huge fires when there is a strong wind on a crowded beach, so that everyone else suffocates.

I used to recommend Compton Bay for barbecues until the National Trust put out an appeal asking people to stop. The main issue was people having barbecues on the clifftop, which can catch fire in hot weather.

Best Isle of Wight beach for singing songs about your ex

Best Isle of Wight beach for letting it all hang out

Best Isle of Wight BEach for a scorching hot day

Runner up: Priory Bay in the East Wight has a background of woodland which also provides some shade

Winners: Chilton Chine, Binnel Bay
Mrs Guru warned me against offering advice on finding quiet beaches, since it might lead to them becoming busy beaches. I pointed out that a) I'm not Justin Bieber so I don't have millions of fans hanging off every Instagram post I make and b) they're generally quiet beaches because they are an absolute pain to reach.

If you just fancy somewhere fairly quiet for a day out I would try:
We wrote a blog on the topic of quiet and remote beaches which includes maps and pictures.

If I'm being an annoying so-and-so I'd choose Watcombe Bay near Freshwater Bay which you can only reach by boat or by abseiling. Be warned that it's a bit risky unless you know what you are doing, as a group of paddleboarders discovered in 2021. They had to be rescued with a winch because they couldn't get back to Freshwater Bay. 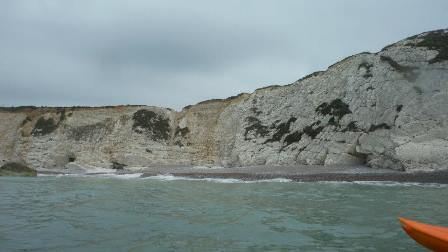 Watcombe Bay is so remote you need a boat to access it
The-Isle-of-Wight-Guru-Don't-Blame-Us-Disclaimer™ All the information on this website is correct, as far as we know, but please do check details directly - and please contact us if you find anything inaccurate. Here's our full disclaimer.