Generally, I wouldn't head to the Cowes area for a day out at the beach, but it's a nice spot for a wander (see our beaches guide for family beach trip ideas).

The beach at Cowes is shingly with some bus-shelter type structures which are ideal for watching the world sail past. East Cowes has a small scrubby beach, which overlooks the Red Funnel ferry ports.
The adjacent village of Gurnard is a little bit sandier, though only at low tide. I've had a few swims at Gurnard and fallen off a paddleboard.

My personal favourite beach in the area is a 'hidden' beach in Gurnard, which is accessible if you follow a footpath behind Gurnard Sailing Club. Osborne Bay is idyllic but is only accessible if you pay the Osborne House entrance fee (English Heritage members get in free).

If you’d prefer an indoor swim, there is a pool at ‘Fitness at Gurnard’ (part of Gurnard Pines - PO31 8QE) which at the time of writing is open to non-members who want to pay for a one-off swimming session. ​

Cowes is the kind of place which mostly avoids grotty pound shops and the like. Instead, there are quite a few posh yachty retailers as well as some independent shops selling pretty things you didn’t realise you needed.

It’s got a decent sized M&S Food Hall and quite a few pleasant pubs and restaurants considering it’s only a small town.

**English Heritage Discount Code: 15% off membership with code EH2022 until 31/05/22**
Looking for accommodation? Check out our caravan holiday park guide

There’s a free museum in the centre of Cowes, which is a collection of stuff belonging to a local character who was an MP, a newspaper magnate, a fighter pilot, a yacht racer and the founder of the London Boat Show.

It’s open in the summer months.

The main boat museum in Cowes is the Classic Boat Museum which has a display of yachts and lifeboats, as well as a gallery. It costs a couple of pounds.

7. The Wight Military and Heritage Museum

The Isle of Wight’s military museum is a volunteer-led thing, with ex-service volunteers offering tours and talks. There are tanks and armoured vehicles and it’s got quite a bit indoors so it’s one to consider on a rainy day. They also do vehicle rides, though it is a bit dependent on staff being available. It’s in Northwood, on the road linking Newport and Cowes.

The small theatre in Cowes has been going for more than a century and seats 200 people. The local Cowes Amateur Operatic and Dramatic Society put on regular shows and it’s also used for cinema showings.

The former railway line linking Cowes and Newport is now a cycle track which goes alongside the River Medina. It’s generally pretty flat and is a good one to attempt with children. There's a bike hire place in Cowes called Two Elements. 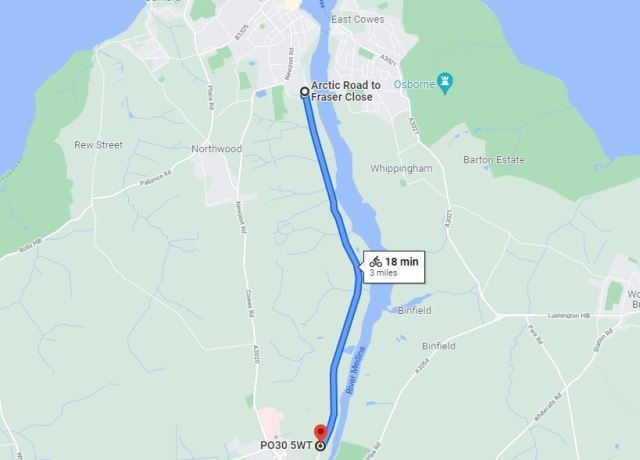 Google reckons the Cowes to Newport cycle track will take 18 minutes...but I suspect it would take us a little longer

Treasure Trails have hundreds of routes around the UK, which are a good way to trick children into going on a walk.

At the time of writing, there's one in Cowes which takes about three hours and costs about £10 for a sheet of clues.

You can text for extra help if you get stuck.

Read our full review of the Isle of Wight's Treasure Trails.

I don't tend to include food and drink on these guides, but the milkshakes from Crockers Farm Dairy are worth a brief mention. It's on the road which links Newport and (West) Cowes.

They've got a self service machine which uses locally produced milk in several flavours. Each month they also have a guest flavour, such as cappuccino or chocolate orange.

I've started calling it the Old McDonalds Drive Thru, but it hasn't quite caught on.
The-Isle-of-Wight-Guru-Don't-Blame-Us-Disclaimer™ All the information on this website is correct, as far as we know, but please do check details directly - and please contact us if you find anything inaccurate. Here's our full disclaimer.