​The West Wight is the least populated and (arguably) the most beautiful part of the Isle of Wight - although many south Islanders will disagree...

Parts of it are quieter than a trainload of sleeping mime artists and the nightlife is limited to say the least. However, that doesn't mean there isn't anything to do.

1. Beaches in the West Wight

West Wight beaches are mostly lacking in facilities and seaside amusements but many of them are beautiful. They are quieter than resorts like Sandown, Shanklin and Ryde. There aren't many hotels right on the beach, or esplanades to wander along.
​
About half of my childhood was spent at Hanover Point and the adjacent beach at Compton Bay, which gets good surf on the right day.

Freshwater Bay is pretty and easy to access (you could take a wheelchair onto the top bit). There are caves which are popular for kayaking and paddleboarding. The caveat is that you'll need a local expert who understands the dangers of the tides. The walk up to the Tennyson Monument near Freshwater Bay is one of my favourites and has great views out to sea.
​Colwell Bay has a sandy beach, though not a huge amount of space for ball games at high tide. Totland Bay has a lovely outlook but also doesn't have much sand at high tide. At low tide it is much nicer.
As you head towards the Island's southerly point (Whale Chine area) it gets more and more remote and the beaches became harder to access without abseiling or walking along from another beach. Chilton Chine and Brook Chine are rugged beaches with crumbly cliffs and few people.
​See our lovely clickable beaches map for locations.

If you've arrived to find it is minus three and the forecast is for rain all week, you might consider West Wight Swimming Pool which is in Freshwater.

2. Alum Bay and the Needles

​Personally, I love the view from the chairlift and have started to enjoy the attractions and the boat trip. There's also a bit about the odd history of the Needles, which includes space rocket testing and wartime defence.

At the headland you'll find The Needles Old Battery, which is a National Trust property. You can go through a tunnel to get a great view of The Needles and sit in their rather quaint cafe.

​You pay a bit to park (£6 last time I went) and then you just pay for each attraction.

Read more about our day out at The Needles or our ​Treasure Trail round the Old Battery.

Looking for accommodation? Try our guides to caravan holiday parks or quirky cottages

Mottistone Manor Gardens is a National Trust property which is a favourite of ours.

My mother enjoys the walled garden of leeks and onions as well as the immaculately kept flower beds. For the children there's usually a trail of some sort and there's an area where they can build dens.

Personally, I like the sea view from the high point of the gardens and the outdoor cafe which will sell you a latte and a piece of cake.

You can't go in the house and the gardens aren't open every day, so check before you travel. It's near to the Longstone (see further down this list).

7. The coastal path and cycle paths

You can, of course, walk along the coastal path at any point on the Isle of Wight, but the stretch around the West Wight is probably the nicest bit (South Wighters will disagree). Some parts around the north east coast (between Ryde and East Cowes) spend quite a lot of time inland because of accessibility issues, but the West Wight stretch is much more open.

​Walkers might also like The Tapnell Trail which is a six mile walk around the 1970 Isle of Wight Festival site, where hundreds of thousands of people watched Jimi Hendrix's last UK performance. It took the Isle of Wight 32 years for its ears to stop ringing before the festival was revived in 2002.

Alternatively, there's a short section of former railway line which has been turned into a cycle track in Yarmouth (see the Red Squirrel Trail Website for details of the route). It's alongside a bike hire place called Wight Cycle Hire and there's a cafe en route if you decide you'd rather spend the day sipping a latte. More adventurous cyclists can tackle the West Wight section of the Round The Island route.

There aren't really a great deal of people in some parts of the West Wight, as it is pretty much all an 'area of outstanding natural beauty'. As a result, there is not much light pollution so you can actually see the night sky.

There is a good guide to stargazing locations on Red Funnel's website which recommends sites including Atherfield, Compton, Newchurch, The Needles and St Catherine's Down. 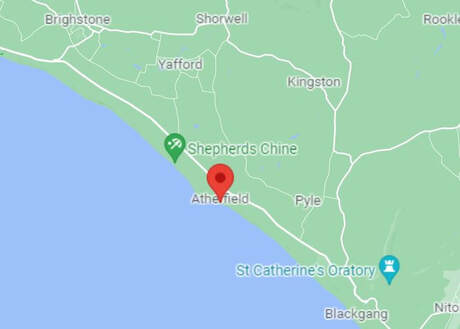 This Google map shows one stargazing spot, near Atherfield in the West Wight

Back in the day, sleepy Freshwater was a meeting point for various artsy bigwigs. A lot of them visited Julia Margaret Cameron who was a photographic pioneer and based herself at Dimbola Lodge.

Nowadays, papparazzi would be flogging photos to Heat Magazine of visitors coming to the house, including Alfred Lord Tennyson (the Poet Laureate who wrote "Charge of the Light Brigade") and GF Watts (no, me neither, but apparently he was a famous sculptor and painter).

You can see Julia Margaret Cameron's work at Dimbola Lodge, and a statue of Jimi Hendrix, who played at the nearby 1970 Isle of Wight Pop Festival.

This Google map shows how to find The Longstone
Do you love crouching and chemical toilets? Check out our camping guide

Another Isle of Wight venue for a quiet day out is Chessell Pottery Cafe, which was previously called Chessell Pottery Barns. As well as eating cream teas you can also do some pottery painting so it's perhaps one for a rainy day?

You can either use acrylics, or have your masterpiece glazed. However, it takes a couple of weeks for glazing so if you're on holiday you'll need to go for the acrylics option.

Read about our unicorn-themed day out at Chessell Pottery (unless there's something good on telly of course).

The West Wight is not the Isle of Wight’s best spot for a rainy day, unless you are one of those hardy ramblers who loves the feeling of water dripping off your nose whilst your cold knuckles clutch a transparent map holder.

Normal people might consider a tour of the West Wight’s finest car parks. It might sound as much fun as a punch in the face but it is actually a pleasant experience, compared to sitting in your holiday home and playing Uno all day.

There are a handful of West Wight car parks with good views including:
You can find out more about locations in our guide to Isle of Wight car park viewpoints.

19. Shopping and pier walking in Yarmouth

What's the opposite of 'whiteknuckle' thrills? Normal coloured knuckles? Anyway, whatever it is, you can find it at Calbourne Mill which is a serene/sleepy day out.

There's a working water mill, a 'clay play' area, a small war museum (i.e. a small museum about wars, rather than a museum about small wars), mini golf, 'rural museums', punts, croquet, petanque, lego tables and a giant chalkboard. You have to pay extra for some things once you get inside.
​
Reviews are about 3/5 at the time of writing.
The-Isle-of-Wight-Guru-Don't-Blame-Us-Disclaimer™ All the information on this website is correct, as far as we know, but please do check details directly - and please contact us if you find anything inaccurate. Here's our full disclaimer.